Watchet and the Military

On 23rd May 1925 it was reported that the preliminaries for setting up a military camp at Doniford were well advanced under the direction of Capt. F. C. Harley, of the Royal Engineers, and that the main body was due on 27th June. Units of the Royal Engineers, Anti-Aircraft Artillery and Signals would make up the force under canvas and would be distinct from the arm of the Air Forces to be quartered at Westonzoyland. Further arrivals of a party of gunners and sappers brought the strength of the camp up to 13 officers and 218 NCOs. Their specific job was to erect tents in the camp field proper at Liddymore, which lies on the southern slopes of Quarry Hill. On its 13 acres 1,000 officers and men would be under canvas by the end of the month, comprising Anti-Aircraft Brigade of Royal Artillery, Anti-Aircraft Company of the Royal Corps of Signals and detachments of the RAMC and ASC and the Ordnance Workshops, all Regulars from the Aldershot Command. By Saturday evening, 27th June, the 1st Air Defence Brigade, numbering some 730 officers and men, would be under canvas. A gun park had been established on the nearby cliff top at Doniford and searchlights were based on high ground to the south. In October 1934 the War Office bought a 30-acre site for a new anti-aircraft gun station camp near the shore line at Lily Green, Doniford.

The summer camps continued until the outbreak of war in the form of fortnightly camps alternating with the Territorial and Regular Armies, most of whom were stationed under Southern Command (London Counties). Thousands of Regular and Territorial artillerymen received their training there.

Queen Bee on the catapult launch pad at Doniford, 1938.

During the visit in August 1938 by the Rt. Hon. Leslie Hore-Belisha, Secretary of State at the War Office, together with high-ranking military staff, the mayors of 16 London boroughs and about 50 Members of Parliament, the honour fell to a battery from Pentonville, the 171st Territorial Brigade, to demonstrate firing at the Queen Bee. Built by de Havilland, this was a pilotless drone target plane used for anti-aircraft gunnery practice in place of target-towing planes. The first Queen Bees were launched from the cruiser HMS Neptune anchored off Watchet, but were later catapulted from the gun park at Doniford and could be jinked about to avoid shells – not always successfully. When hit it would crash into the sea to await recovery by the SS Radstock berthed in Watchet harbour. A much faster successor, the Queen Wasp, was promised for 1939, but before it could be delivered enemy planes were providing real targets. Gunnery practice at Doniford continued with target-towing planes.

At the outbreak of war in 1939 Doniford Camp was taken over by the RAF and remained in their hands until 1957, during which time secret work on radar was also undertaken. 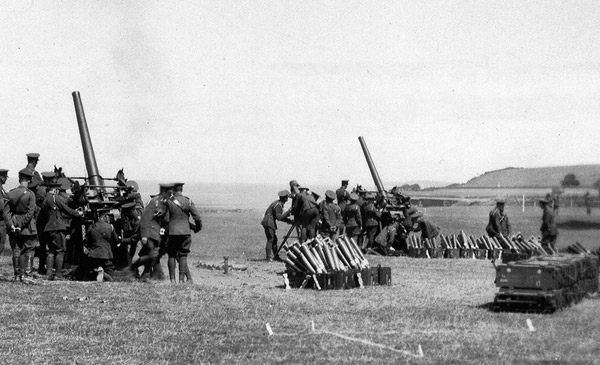 The anti-aircraft guns on the cliff-top at Doniford finally fell silent on 1st February 1957, and during that year the Doniford site was transferred to the War Office. The first infantry unit to arrive in 1957/58 was the Northamptonshire Regiment. On lst June 1960 the lst Battalion, Royal Lincolnshire Regiment and the lst Battalion, the Northamptonshire Regiment were amalgamated to form the 2nd East Anglian Regiment (Duchess of Gloucester’s Own Royal Lincolnshire and Northamptonshire). A formation parade was held at Doniford Camp on 12th July 1960, the occasion being graced by the presence of HRH The Duchess of Gloucester, the new Regiment’s Colonel in Chief. However, the Regiment’s life was short-lived, for on 1st September 1964 the 1st, 2nd and 3rd East Anglian Regiments and the Royal Leicestershire Regiment were amalgamated to form a new large regiment known as the Royal Anglian Regiment.

On Tuesday, 23rd April, 1968, Field Marshal Viscount Montgomery of Alamein was chief guest at the Vesting Day Parade for the new Royal Regiment of Fusiliers at Doniford Camp.

The camp was finally closed by a conveyance dated 13th October 1982, although troops had departed some time before then. The main camp site has now been transformed into a holiday complex.

Thanks to Jack Binding and Maurice Chidgey for information.

RAF Units listed as having served at Doniford (Watchet)